More than 80 aspiring young art students worked together with award-winning Fremantle illustrator, Ross Potter, to celebrate the endangered Carnaby’s Black Cockatoo – a species that is endemic to the South West of Western Australia. The collaborative art project was produced here at the College, which is nestled within a native bush setting, adjacent to North Lake, part of the Beeliar Wetland, a significant food source and roosting area for the cockatoo on the Swan coastal plain. 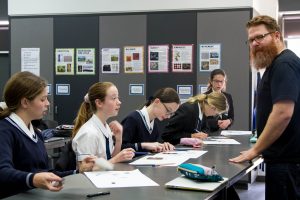 “Our students are well aware that sadly, the gradual destruction of their natural habitat has seen the number of Carnaby’s Cockatoos in WA decrease by at least 50 percent over the past 45 years,” Mr Ashby said. “They wanted to express their awareness and bring attention to the issue by including and acknowledging these majestic birds which are found around the College in their artwork. Ross Potter is known for his large scale and highly detailed works with graphite on paper and was originally inspired by the old buildings in Fremantle, but has since moved on to more nature-inspired pieces."

Students each re-creates a section of an image using tonal shading of graphite pencils to contribute to a large-scale communal artwork that will be unveiled at our Community Open Day on 24 August.